Several years ago, I visited the Guggenheim Museum and came across a painting that absolutely captivated me: Lobster and Cat by Pablo Picasso. This painting, completed in 1965, reveals the artist’s sense of humor as he depicts aggression provoking fear. Here is what I see; A clash of two worlds.

Look at the surprise and defensive posture of the terrestrial dwelling feline as it suddenly finds itself face to face with the alien seafloor dwelling crustacean in an aggressive stance. Bristled tail, arched back, mouth agape, and claws unsheathed as it experiences antennae forward, head up, and tail flat. It is evident that neither animal understands what the other is; their instincts take over. 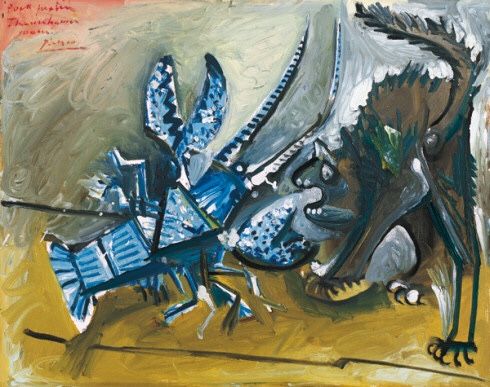 What if the lobster, who has entered the realm of the cat, didn’t condemn the cat’s world and instead taught the cat the struggles of being a lobster finding itself on land? What if the cat unhunched its back and sheathed its claws and just sat and listened and acknowledged the lobster’s situation. Rather than telling the lobster it was an alien and did not belong on the land, the cat shared with the lobster the nature of cats. Imagine a world where a lobster could be free to be a lobster; exoskeleton, gills, coldblooded, and the whole nine yards. Imagine a world where the cat is respected for its cat-ness; mammalian fur, warm-blooded, air-breathing, the whole nine-lives.

If only the two animals respected each other’s perspective, even if they disagree. Maybe both could come to see the beach as something shared; perhaps there is room in the land for both.

Wouldn’t it be wonderful if, when confronted by a worldview that is different from our own, we could sit down, have a cup of coffee, and talk with and listen to one another? Wouldn’t it be nice if we could teach rather than attack?

You can decide if you are the lobster or the cat.

“So whatever you wish that others would do to you, do also to them, for this is the Law and the Prophets.” Matt 7:12 ESV

Pat is the pastor of First Presbyterian Church of Sparta, New Jersey. He is Jenise's husband, Peter and Nicole's dad, and a passionate follower of Jesus Christ. Pat dabbles in many things; you will get a feel when you follow his Search for 42! View all posts by Rev. Dr. Patrick A. Sileo